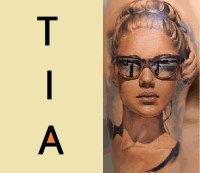 Vishal Verru Decgan (born in 1969) is better known as Ajay Devgan – a Bollywood / Hindi film actor, producer and director who is considered one of the most popular actors in Hindi cinema. Ajay Devgn has won a huge number of awards in in his career, including National Film Awards and is the son of Verru Devgan also involved in Bollywood. Ajay Devgan has a tattooed with his daughter Nysa’s name and also a picture of the Lord Shiva.

Try out a temporary tattoo for 1-5 days

Place your temporary tattoo in different places and see what you like best, before you commit

SCAN THIS QR CODE WITH YOUR PHONE